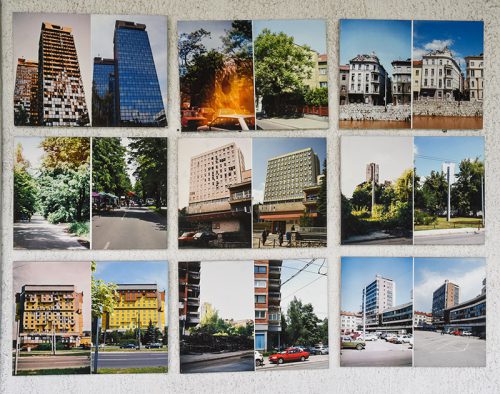 In the spring of 1996 I took photographs around Sarajevo with a not very good Nikon 35 mm film camera. In the spring of 2011 I took the same shots from the exact same location with a not very good Nikon DSLR camera. The photographs from 1996 were taken just after the handover of Grbavica, when you could still clearly see and feel and smell the effects of the siege of the city. And yet there was a sence of hope, a sence of freedom. People were planning to visit the coast for the first time in five years, determined to get there even if they had to walk. Children played on Vilsonovo, their parents making sure they stayed on the orrect side of the mine warning tape stretched all along the river bank. Outdoor cafes were overflowing, junctions were open spaces, all the barricades were gone. There was no more need to run, no more need to hide. The photographs from 2011 are of a city transformed. There are few remaining signs of the siege, just the pockmarks and perhaps the word “Safety” scrawled on the walls. Otherwise, bombed out buildings and blown out windows are now reconstructed and reborn as apartments, offices and hospital wards. The children who play on the avenue of Vilsonovo know these buildings and streets only as they are now. But many of their parents, including photographer himself, often say: “Nothing changes, nothing improves, everything is the same.” They combined photos show that enormous changes and improvements have occurred over the last 15 years. They illustrate the wonder of the human spirit. They indicate that Sarajevo’s future is not preordained but can be shaped and always improved. Photographer Jim Marshall was born and raised in Scotland but has lived and worked in Bosnia and Herzegovina since 1994.