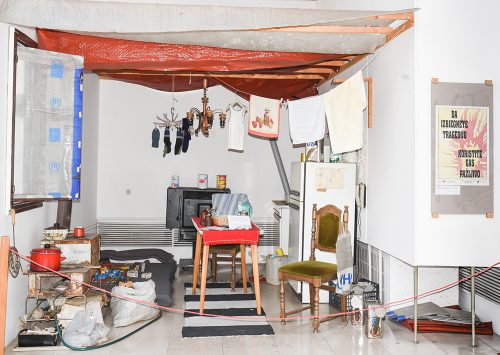 “Sarajevo under Siege” exhibition is a story about the life of the citizens during the siege of Sarajevo from 1992 to 1995. The exhibition tells us the story about persistence, resourcefulness and creativity Sarajevans who lived 1 335 days without electricity, water, heating. At the exhibition you can see how daily life in the city flowed, where and how Sarajevans procured food and water, how markets and streets looked, how people communicated, how hospitals and schools operated, how cultural life was developed… The exhibition was prepared by the curators of the Museum, but citizens of Sarajevo also participated in the creation process donating war items to the Museum, sharing their war stories and memories. The story of the siege is told through photographs, documents and objects made by the citizens. Among handmade objects, among other things, is a war thermos bottle, improvised lamp, water carts, stoves made of oil cans. “With this exhibition, we have tried to avoid giving final judgements, ideological opinions and qualifications. We are leaving them to history science and time. We have primarily opted for being true witnesses of the time and events behind the Sarajevo “closed doors”, with the authentic exhibits being, hopefully, documents that the future will appreciate.”